Trappeurs Crossing Resort is a popular development in Steamboat Springs with 6 separate buildings that appeal to all tastes and budgets. It always ranks at the top of travel lists for best places to stay in Steamboat. People like staying here.

Search all available condos for sale at Trappeurs Crossing or scroll down for tons of information each Trappeurs property.

You can take the seasonal shuttle or walk to the base from Trappeurs. It’s only two blocks from the ski area and the Wild Plum market, restaurants, and Gondola Square.

See which Trappeurs Crossing building works for you:

Trappeurs Crossing is the original building which was completed in 1983. You’ll find 2, 3, and 4 bedroom condos. Some of the larger floorplans are on two levels so you and your guests can spread out. Many of the condos have been remodeled with granite countertops, new kitchen cabinets, and new baths.

Timberline Lodge at Trappeurs Crossing was completed in 1999 and has mainly 1 and 2 bedroom condos with a few 4 bedroom units.  Timberline was built 16 years after the original Trappeurs and the rest of the buildings opened within a few years of each other. Timberline units are often one of the better values if you’re looking for a smaller condo at Trappeurs Crossing.

Champagne Lodge at Trappeurs opened in 2001 with more luxurious finishes like granite countertops and rock fireplaces.  Air conditioning wasn’t introduced until Aspen Lodge was built, but many owners have added swamp coolers (and similar air conditioning units) for summer comfort. Summertime is one of the best times to be at Trappeurs, and one of the pools is right outside the Champagne Lodge door.

Aspen Lodge at Trappeurs began a new focus on luxury and introduced a few private patios with private hot tub, fire pits and barbeque grills off of some of the ground floor units.  When it was completed in 2006, Aspen Lodge was one of the first condo complexes in Steamboat to have central air conditioning, and there was a noticeable step up in finishes including granite, heated towel bars in the baths and stainless steel appliances.  Owners also get a large storage closet in the garage and two ski lockers.

Emerald Lodge at Trappeurs has 3, 4, and 5 bedroom condominiums to accommodate the families coming to the “Best Resort for Families in the West”. Most bedrooms are ensuite and living areas feature open floor plans.  Emerald Lodge raised the bar once again with radiant floor heat, frameless showers, and granite and stainless.  If income is a priority, the patio units tend to rent better and command higher rental averages than Emerald Lodge condos without private patios. 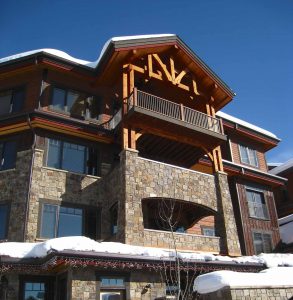 Bear Lodge at Trappeurs Crossing was completed in 2009 as the last building in the Trappeurs Crossing Complex.  Bear Lodge also features larger condos with 3, 4, and 5 bedrooms with interiors almost identical to Emerald Lodge. The exterior was upgraded with stone and there are more patio units with gas fireplaces, hot tubs, and grills.

Please contact us to find out which of the Trappeurs Crossing lodges is right for you and your family and friends. 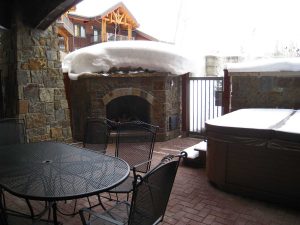 Steamboat Ski Condos is your resource for buying and selling Steamboat Springs Colorado condos. I know all about condominium developments and can help you find the best fit.